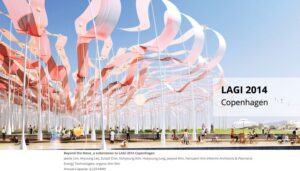 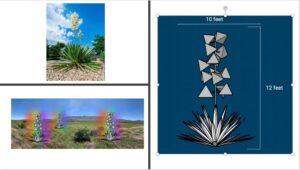 In addition to their artistic renderings, teams were required to estimate the amount of power, electrical energy, and number of homes their installation could support in a year. To prepare for this project, students read a science fiction story about a solar snake in Phoenix, watched an interactive climate change video, and a video called Imagine the Future Ted-Ed by Xiye Bastida. They even competed in a tower building contest with Emeritus Civil Engineering Professor, Dr. Walter Gerstle. At the end of the camp, students presented their designs to parents, instructors, and staff.

Although the students were unable to visit the UNM campus this summer, the virtual program was still jam packed with engaging and thought-provoking STEM activities. When camp concluded, the students walked away with a better idea of the real-world applications of STEM, as well as the different and creative ways STEM-thinking can be used.

The camp is sponsored by AEOP’s Unite program, the NSF/DOE QESST Program, the NSF CREST program, the Department of Energy CIESESE Project, and the UNM School of Engineering. Unite is a four-to-six-week-long, pre-collegiate summer experience for talented high school students from groups historically underserved in STEM. The program, administered by the Technology Student Association, is held a participating higher education institutions and works to inspire its students to pursue college majors and careers in engineering and other STEM-related fields.