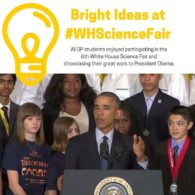 Washington, DC — April 13, 2016 — The U.S. Army Educational Outreach Program (AEOP) cheered on students from several AEOP-sponsored programs who are among the budding scientists and engineers presenting at the 6th Annual White House Science Fair today. Eight students who have furthered their exploration of science, technology, engineering and math (STEM) in AEOP programs participated in the event hosted by the Office of Science and Technology Policy. The fair highlighted a variety of student projects and featured special exhibits encouraging youth interest in STEM.

Participating students represented the Junior Science and Humanities Symposium (JSHS), Junior Solar Sprint (JSS) and eCYBERMISSION, all of which receive support from AEOP. AEOP students have been invited to attend the event since the inaugural science fair in 2010.

“Year after year, remarkable students from across the country impress us with their creativity, hard work and talent in science and engineering,” said Jeffrey Singleton, Director of Basic Research, Office of the Assistant Secretary of the U.S. Army for Acquisition, Logistics and Technology or ASA(ALT). “Their potential and the importance of science literacy for students are why we continue to expand our programs. We’re thrilled that the White House has once again recognized students from the AEOP community.”

Prateek Dullur, Adarsh Mattu and Aditya Ramanchandran make up Team HydroPhysics of eCYBERMISSION. The team built an Anti-Flood Design to help prevent basements from flooding. The design uses super absorbent polymers to strengthen the seal and keep water from leaking.

This year marks the first year that a JSS team has been invited to participate. Kylah Cain-Ward, Destani Cullari and Adrianna Pusey and are members of the team, which placed first last year’s regional JSS competition.

“From my perspective as a mentor, I think it’s awesome how the girls and I turned ‘we can do this’ into actually doing it,” said Chrissandra Jackson, American University freshman and mentor to the JSS team. “It’s been an amazing experience to see how one small project grew into so many opportunities. They’ve surpassed my expectations—and I set the bar high.”

The annual White House Science Fair, now in its final run under President Obama, has helped draw important attention to the need for greater opportunities in STEM, particularly for underserved students, as well as the value of community partnerships in expanding access to meaningful science exploration for all youth. The fair also celebrates the innovation and teamwork at the core of STEM professions, much like AEOP programs themselves.

About AEOP: The U.S. Army Educational Outreach Program (AEOP) is comprised of U.S. Army-sponsored research, education, competitions, internships, and practical experiences designed to engage and guide students and teachers in science, technology, engineering, and mathematics (STEM). From elementary school through graduate school, students at all levels, interests, ethnic, economic, and academic backgrounds are encouraged to participate in hands-on programs in STEM disciplines. More information is available at: www.usaeop.com.